On this, the eve of my grandmother’s funeral, as many who knew her pray that she accepted God’s gift of salvation in her last days and moments here, it is not lost on me that there may be others who bear a certain resentment toward “deathbed conversions.” Like the workers hired first, we feel we have “borne the burden of the work…” Or, like the bitter other brother of the prodigal son, we might refuse to welcome him home because, “‘Look, all these years I have served you and never disobeyed a commandment of yours. Yet you never gave me even a young goat so I could celebrate with my friends. But when this son of yours returns from squandering your wealth with prostitutes, you kill the fattened calf for him!’” (Luke 15: 29-30). So we look to the thief on the cross with resentment and indignance, rather than with compassion and generosity.

Over the years, I’ve come to realize one reason for this. We are too busy seeing the sacrifices we’ve made for the Kingdom to recognize the many blessings that are ours in Christ. Think about it—the workers hired first thing in the morning and the responsible brother had one of the greatest privileges: security. They didn’t have to wonder if they would find work that day, or have food to eat, or a place to sleep. They were free from fear and uncertainty. Sure, they had to put in an honest day’s work, but even that is a privilege, is it not? Having faced unemployment and underemployment in my life, I can say that it is quite stressful, even if it’s just for a short time. And during that time, I worked as a day laborer, showing up at the temp agency as early as possible each morning, to try to beat the others to the line, so that I would have the best possible chance of being hired. I remember once when a one-day job turned into a week-long position, and I remember how relieved I was to know that I had work lined up for the rest of the week.

We have so many blessings as followers of Christ and as people who trust and rely on the One we know to be a good God. I couldn’t possibly list them all here, but as examples, consider the peace that passes understanding (Philippians 4:7), grace that is sufficient for every challenge and trial we face (2 Corinthians 12:9), mercies that are new every morning (Lamentations 3:23)…and on and on. Indeed, as the prodigal’s father stated, “Son, you are always with me, and all that is mine is yours” (Luke 15: 31). Following Him, and doing the work of the Kingdom, is not a burden, but a privilege. So when I think of the alternate reality in which I would have to fend for myself—rely on my own strength to save me, my own ability to provide for myself, and all the other burdens that accompany a life lived far from Him, I’m left with compassion and generosity for those who live that way. And the parable of the generous landowner tells us that God’s generosity knows no bounds—their blessing doesn’t diminish mine. Micah 7:18 tells us that God “delights to show mercy.” So let us go and do likewise (Luke 10:37). 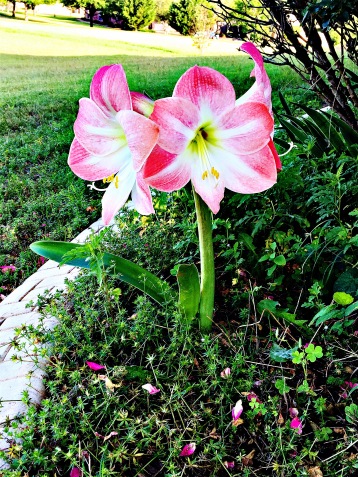