I am often eager to talk about my kids and share their photos with anyone who will listen! I have watched them grow, seen them develop spiritually, prayed for them during hard times, and celebrated triumphant moments with them. But as much as I love these children, they don’t actually live in my home because they have families of their own in countries around the world. I sponsor them through a Christian organization called Compassion International which works with local churches to provide food, medical care, school supplies, mentoring, and an opportunity to hear the Gospel.

Sponsorship is an adoption of the heart. Each child only has one sponsor so the relationship that you build and the mentoring you provide through letters is just as important, if not more so, than the financial commitment. If you didn’t get to see the movie “Beautifully Broken” when it was in theaters, I encourage you to rent it to see the dramatic impact that sponsorship can make not only on that one child, but on you and other people that God connects along your journey. In this true story, two families on opposite sides of the war in Rwanda were able to experience forgiveness and transformation through a mutual connection with one a family in America who sponsored the child from one of the families and began serving alongside the other family who had traveled to the United States as refugees.

Compassion gives sponsors a path to go beyond letters and prayers in the form of mission trips which include a visit with your child. My first trip was a life-changing experience for me when I got to meet Lucson after many years of sponsorship (pictured below). When I told my mom that I was going “over-seas” to Haiti, she very sweetly informed me that Haiti wasn’t overseas – it was below Florida! So, as you can tell, I had a lot to learn. The week that I spent there was very eye-opening and humbling. The families, who had so little in terms of material possessions, were so full of hope. My group arrived on Easter Sunday in time to celebrate with a local church. Later, Compassion brought all the children to a central, old resort and as we stood waiting for our names to be called, I already spotted Lucson and he started waiving to me! It was an incredible day that I won’t forget. Lucson brought me a gift which was home-made peanut butter, and I treasured it. I asked him what he wanted to do first and he wanted to swim … I said ok as I was secretly reminding myself that I only knew the “dog paddle” and we were in the ocean! He and several other kids said they had never seen the beach – even though they live on an island.  My trip to Haiti took place right around the time digital cameras were becoming available so most of the people in my group had one and the kids loved to have a photo taken and then run around behind us and see it.  You can probably imagine our dilemma when a couple of people took photos with film cameras instead and did not have a preview screen for the kids to see! I had sent Lucson birthday money in years past and he had written me to say he bought a goat, and then a second goat, and a third. Well, as I said – I had a lot to learn because I thought he was adopting pets and was a little unsure why he needed extra mouths to feed. So, when we met, I asked him about the goats.  He told me that he was very happy to have them and that he was still taking good care of them like I had told him to do. And then he said something that I honestly did not realize, but you can probably guess – he got the goats not for pets, but so that he could have milk to sell in the market to help his family.  Lucson has now graduated, but he is still a big part of my family and we even exchange an occasional email.

I returned home from that first trip with a deep desire to help other children and to spread the word about Compassion. I became an Advocate and started speaking at churches along with volunteering at concerts and other events. And my family grew! Since then I have sponsored more children and have been blessed to meet five more of them. Each Compassion trip has been a unique adventure. In Kenya, I met Pirante and went on a safari, which was a dream come true.  I learned about the Maasai tribe and saw the contrasts in that beautiful country between the rural landscape that we all picture and the crowded slums in the city where most of the kids live in poverty. In the Dominican Republic, I experienced heartbreak with the family of a little girl I had sponsored named Nancy (pictured below).  I had registered for the trip and a couple of weeks before it began, I received a call from Compassion. They told me that little Nancy had died in a house fire along with two of her siblings when a kerosene lamp fell. I decided to sponsor another child, Romeilyn, and go on the trip anyway, where I met her before we had even exchanged a letter. But when I got there, the leaders told me that they wanted to take me to see Nancy’s parents. At first, I didn’t want to go because I thought it would be such an imposition on a family that just buried three children, but I was told they were the ones who asked for me to visit so I did. We sat and prayed together, and I found out that both parents and an older child had accepted Christ a few days earlier despite the tragedy because of the way Nancy’s church had supported them and shared the Gospel with them. Even as they grieved, they wanted me to know that I was part of their family and that really had a profound effect on me. Other trips have been filled with laughter and lots of hugs including ones to meet my three artists: Edward in Bolivia (pictured below), Josue in Ecuador, and Pedro in Brazil!

So if you aren’t in a position to have a child live in your home either permanently through adoption or temporarily through fostering, would you consider inviting one to live in your heart? You can make such a difference and I think you will find that ultimately you are the one that receives the greatest blessing. Just remember the 4Cs of Compassion – Christ Centered, Child Focused, Church Based, and Committed to Integrity. And if you already have a child, I want to encourage you to write letters – they mean so much! If you have any questions or want to see/hear more, my email is:  drbeckysue@gmail.com. Sponsorship costs $38/month and you can select a child at www.compassion.com/beckysueparton. 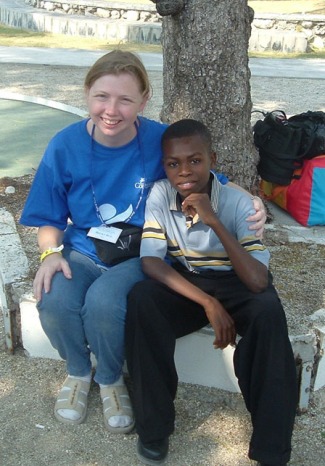